For decades, the same plasmid technology has been used in vaccination, cell and gene therapy, and as a raw material in viral vector and RNA production, but that technology often isn’t a good fit for the processes where it’s being used. Now, with the growing availability of Nanoplasmid™ vectors, that is changing.

In my previous post on Nanoplasmids, I discussed structured DNA repeats. In this second part of an ongoing series of posts, I delve deeper into the science of Nanoplasmids, with the focus of this discussion being antibiotic markers.

Antibiotic markers in cell and gene therapy products
Vector-encoded antibiotic markers can be transferred to environmental bacterial organisms through horizontal gene transfer (HGT). For example, HGT has been documented to occur through unintended release of plasmid vectors from laboratories or manufacturing facilities that then transform and propagate in freshwater environmental organisms.

HGT is a well-known safety issue; both the US Food and Drug Administration (FDA) and the European Medicines Agency (EMA) have recently recommended that antibiotics not be used in bacterial selection for gene therapy products. Further, certain types of antibiotic resistance markers, such as genes encoding β-lactams such as ampicillin resistance markers, are particularly problematic since these FDA and EMA guidances state that selection using β-lactams should not be used during manufacture of a therapeutic product due to hypersensitivity reactions to β-lactams in some patients.

Are protein markers any better?
The majority of antibiotic-free selection markers for plasmid maintenance in bacterial cells are protein-based systems, such as those designed for:

However, vector backbone encoded proteins in gene therapy products when expressed may interact with cellular components to alter cell functions or viability and will likely induce an immune response that may be detrimental to the patient.

This later issue is shared with antibiotic markers, and has been shown to be a concern with AAV vectors due to high frequency reverse packaging of the bacterial backbone during production. This results in significant bacterial backbone encoded antibiotic resistance marker packaging into AAV viruses, and subsequent marker gene transfer to a patient during therapy.

Eliminating protein and antibiotic markers using non-coding RNA markers
Ideally, bacterial selection would be mediated by a non-coding selection marker. These have been developed, as:

One of these RNA/RNA interaction non-coding selection marker systems, the RNA-OUT marker system, has a high yield robust manufacturing process that has been scaled to the 200g lot scale in cGMP manufacture. RNA-OUT vectors have also been tested without safety issues in multiple clinical trials.

Nanoplasmid vectors use the RNA-OUT antibiotic-free marker and have additional intrinsic advantages, notably that the vectors also contain a specialized bacterial R6K replication origin in place of the traditional pUC replication origin, making these vectors replication-incompatible with native organisms.

This is an additional safety factor since Nanoplasmids can only replicate within the specialized E. coli host strain used for manufacturing, dramatically reducing the risk of HGT. Additionally, the Nanoplasmid backbone has no coding capacity, eliminating the risk of AAV virus mediated vector backbone encoded protein marker transfer to patients.

Critically, retrofits of existing Lentiviral, AAV or mRNA vaccine vectors will not change the sequence or composition of the vector payload, Lentivirus, AAV virus or mRNA transcription unit in these cases.

In my next post discussing the potential of Nanoplasmids, I’ll touch on vector backbone mediated innate immune activation and why this can lead to cell death, silenced transgene expression, and reduced product efficacy, showing a different perspective of the platform to improve cell and gene therapy performance. 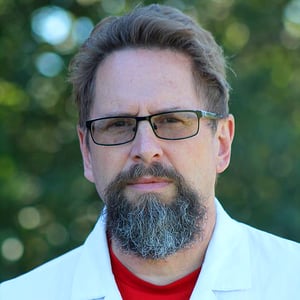 Jim Williams, Ph.D., is Vice President of R&D and Chief Scientific Officer of Nature Technology Corporation (NTC), an Aldevron-owned company based in Lincoln, NE. He is a specialist in non-viral expression vector systems with extensive experience in biologic development. His expertise includes molecular biology, regulatory affairs, quality, molecular genetics, fermentation, and protein expression systems. Dr. Williams earned a Ph.D. in genetics from the University of Alberta, then completed postdoctoral training at the University of Wisconsin-Madison. He is the inventor of vector innovations including the Nanoplasmid™ platform and holds 31 US-issued patents with multiple foreign equivalents, along with numerous publication credits.
Eliminate Protein and Antibiotic MarkersDecember 21, 2022
Structured DNA RepeatsOctober 12, 2022