An outlook for mRNA, saRNA and Circular RNA

When mRNA vaccines began to roll out in late 2020 to fight the COVID pandemic, it was the first large-scale use of the molecule after years of research. But the success of those vaccines was only the beginning of new opportunities for the RNA field.

In the relatively short time it took to develop the COVID vaccines, the mRNA field may have advanced as much as 10-15 years more quickly than would have happened otherwise. Now, that success, in turn, is fueling optimism for research expanding to include self-amplifying RNA (saRNA) and circular RNA, with the potential for another leap forward in as little as 5-10 years.

As a scientist, I see the promise held by all three for developing therapies. The more therapies that we can help our clients develop, and help more people receive treatment for disease or receive vaccines to prevent disease, the better. With a growing list of RNA options, there will be more flexibility to develop those therapies. Use of mRNA has solved some of the issues that the industry has had with DNA and protein, and that is what supports the growing enthusiasm for RNA use.

mRNA starts, saRNA follows
Starting with mRNA and saRNA, mRNA has a more established history, which is likely why both Moderna and BioNTech used it for developing their vaccines, apart from the fact they have been working in the mRNA space for quite some time. Comparatively, self-amplifying RNA still in its infancy, and it does have some disadvantages.

saRNA has a huge molecule, at least 8kb in length. The T7 polymerase is not great at making these transcripts, so you get truncated transcripts. Also, larger RNA is more fragile. You have to be very careful on downstream manufacturing processes so you don’t degrade a lot of RNA.

From a regulatory perspective, we’re still trying to understand how the immune system might respond to the replicase portion, in general. Even with those obstacles, there have been positive saRNA trials. For example, HDT Bio recently received an Emergency Use Approval in India for its saRNA-based COVID-19 vaccine.

The HDT approval highlights one notable advantage of saRNA over mRNA: dosage sizes. In theory, you can deliver a 50-to-100-fold smaller dose using saRNA when compared to mRNA. Looking at the vaccine spaces, reducing the dose size makes vaccines much more accessible, especially for less affluent countries. For me, that really shows the potential of saRNA. Additionally, the molecules leave a lot of room for improvement in development. You can tweak them in such a way to curtail some of the disadvantages such as the size.

One thing to remember, it takes a lot to make saRNA for therapeutics, even to prove its safety. mRNA has a head start when compared to saRNA, and now that we’ve been able to utilize mRNA in working therapies, I think saRNA is the next step in the RNA field. After that, we will likely be adding circular RNA into the mix.

Circular RNA in the wings
Circular RNA, in my mind, will take 5 to 10 years, at least, before it comes to the clinic, but it does have some strong positives to consider. Circular RNA is much more stable because it's a circle. You get much more activity out of it (per unit mass or per unit copy), which means you can get much higher protein expression, though the IP landscape is a bit murky. So, in that respect, you’ve got to be careful with circular RNA.

But it has a lot of other advantages. For example, you don't need a cap. You just need to make the RNA. Then you need to purify to remove the linear pieces, or it will trigger immunogenicity. Of the three modalities. mRNA is ahead and in use, self-amplifying RNA is maybe five years from extensive use, and circular RNA is maybe 10 years away

But as far as circular RNA goes, it probably opens the entire spectrum of therapeutics. If you don't have to use capping, if it is circular, you're triggering lesser immunogenicity from the uncapped mRNA perspective. That is the promise of circularity. Now, there will be challenges. But I think circular RNA is going to be the therapeutic molecule heavily used 10 to 15 years from now. There isn’t any human data since it's not in humans yet. But the initial proof of concept cell data looks very promising for circularity. 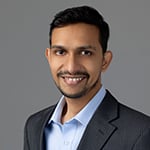 Venkata Indurthi has been a member of the Aldevron team since he received his doctorate in pharmaceutical sciences from North Dakota State University, Fargo, ND, in 2016. He has held a variety of positions in increasing responsibility and focus, including Senior Scientist in product and process design, Director of RNA Operations, Director and then Vice President of Research and Development before being named Chief Scientific Officer in 2022. Indurthi received his Bachelor of Science in Biotechnology from SRM University, Chennai, India, in 2010. He has been recognized with several awards and honors from a variety of organizations, served on or lead many panels, and has authored or participated in numerous published articles.
A Focus on Analytics, for RNA and BeyondSeptember 28, 2022
Comparing CappingSeptember 7, 2022
A Three-Step RNA ProgressionAugust 24, 2022