Oravec and Smith join the company as quality control analysts. Oravec graduated from North Dakota State University (NDSU) in Fargo in 2009 with a bachelor’s degree in microbiology, and from George Washington University in Washington, D.C., in 2017 with a Master of Science in public health microbiology and emerging infectious disease. 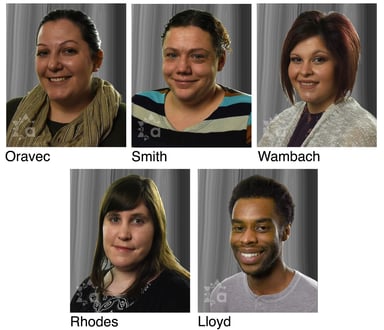 Smith graduated from Minot State University in Minot, N.D., in 2008 with a bachelor’s degree in biology, and in 2012 with a Bachelor of Science in Education, Biology. She earned a master’s degree in microbiology from NDSU in 2017. Smith was previously employed at Bishop Ryan Catholic School in Minot.

Rhodes is a document specialist, who attended the University of Northern Iowa in Cedar Falls, Iowa. She was previously employed at Clinical Supplies Management (CSM) in Fargo.

Wambach and Lloyd are laboratory technicians. Wambach graduated from Minnesota State Community and Technical College in Moorhead, Minn., with an associate degree in graphic design. She previously worked at Accra Care in Moorhead. Lloyd attended Los Angeles Valley College in North Hollywood, Calif., and was previously employed at Atos in Fargo.

Aldevron serves the biotechnology industry with custom production of nucleic acids, proteins, and antibodies. Thousands of clients use Aldevron-produced plasmids, RNA and gene editing enzymes for projects ranging from research grade to clinical trials to commercial applications. Aldevron specializes in GMP manufacturing and is known for inventing the GMP-SourceTM quality system. Company headquarters are in Fargo, N.D., with additional facilities in Madison, Wisc., and Freiburg, Germany.